I must celebrate him for he has given me my most reliable companion for the past 33 years.

This is the calligrapher of the most circulated copy of the Qur’an today. The Saudi Kingdom alone has printed over 200 million copies for free distribution in the world, not to mention commercial copies produced by different groups and individuals.

I just wonder how much reward accrues into his account every time I gaze at these beautifully written words of the Most High. There cannot be something more beautiful than this exquisite text. Not a limousine. Not a scene. Not a stone of diamond. Not a monument. Absolutely nothing.

Every word carries a beauty of its own in the text. It is so marvelously crafted in a style never to be found in any other book. It speaks to the reader, comforting him, soothing his eyes and luring him to continue reading the Holy text indefinitely.

Many times, I have doubted whether it was indeed handwritten because the fidelity in repeating the style and form of the same word is profoundly amazing and can be matched only by a machine. How many times, for example, have I picked a word like على and went about comparing its morphology in various pages, only to find it exactly similar in so many places as if the fingers of this Syrian calligrapher have a memory that recalls exactly the pattern they followed in scripting the same word previously? Allah. Allah. Allah. It is this consistency that makes his own copy of the Qur’an unique.

I had to go searching for the calligrapher whose name has stuck in my head since I bought this mini copy of the Quran (see picture) somewhere in Zaria at the debut of my PhD in 1989. And behold! My Uthman Taha was there on Google, Wikipedia and YouTube. I watched him time without number yesterday and saw that really he designed every word in the “Medina Text” in his office in the ancient city of the Holy Prophet. True. It is not written by a machine, I delightfully discovered. It is a pure product of human ingenuity.

One cannot fully appreciate the Qur’anic calligraphers like Sheikh Uthman Taha without knowing the anatomical details of their task. Writing the words in consonants (bakake) comes first as we used to do on our plates in childhood. But even here, at this primary level of the work, the differences in which many polymorphic words—like ‘mercy’ which comes with opened ‘t’, رحمت in seven places instead of the usual رحمة—must be strictly written in the variants they appear in particular locations of the text. There are so many words like that, not to mention the ‘aliful madd’ where it breaks (alu baki ) a word and where it doesn’t (alu ja). These fine anatomical differences go back to the original Uthmani script which had no vowels. 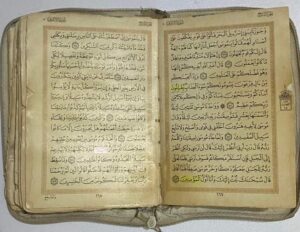 Placing vowels (maasle, or wasulla) on the consonants is more complex as each has to be placed in a particular position and form that will not only ensure the legibility of the text but would also follow the rules of reciting the word often in relation to the one that follows it. Thus the rules of tajweed are reflected in the placing every vowel. This is not easy for a text of 600 pages.

Yet, our calligrapher, Sheikh Uthman Taha, completes it in three years, and it is reviewed over a year. Thus in the first 30 years of his stay in the holy city, he wrote 10 copies of the Holy Book and wished that he has written copies for the other six different recitations (qiraaat). He continued writing beyond the age of 70, with the fingers still steady—a very rare gift.

He narrated how one day he walked into his secluded office to start writing. Surprisingly, the pen refused to write. Imam Huzaify was incidentally there. He tried everything but the pen failed. Then he remembered that he did not perform the usual ablution that he does every time he would write the script. He performed it and the pen picked up…

We have nothing but prayer for this son of Aleppo who was born in 1934 and who dedicated his entire life to produce the amazing text that has now standardized the Qur’anic script, both in layout and in style. For memorizers of the Holy Book there cannot be a better gift than having such a consistent text, as Sheikh Abdullahi Fodio once advised. Today, wherever you turn to, in hardcopy and on the Internet, the copy produced by Uthman Taha is there to provide you that graphic picture, the image that permanently inscribe every verse and page of the Qur’an in your heart. Once reciting the Qur’an off head, this mental picture presents itself before you and you just follow it, almost line by line, without skipping a verse.

May God have mercy on late King Fahd who employed and hosted this great calligrapher of the Qur’an and on the Saudi Royals who continue to treat him with the prestige he deserves. They took him to the Ka’aba, open its door for him. He went in and tears flowed down his cheeks. He never contemplated such a moment 70 years ago when he was an undergraduate of Shariah, Arabic language or Islamic decoration arts and painting in his home country of Syria.

Nothing could be better. Everywhere the copy of the Qur’an he wrote is read he gets rewarded by God. As it is read every second across the globe, every second his account is credited with reward from the Most High. It goes on even after his death. Wow.

A person of the station of calligrapher Sheikh Uthman Taha is truly worth celebrating. I thank him for providing me a companion of over 3 decades. May God continue to bless him and give him abundant health as he clocks 88.