Kebbi State Governor, Senator Abubakar Atiku Bagudu has been described as the champion of youths,a strong benefactor and a tireless Father to youths in the state and Nigeria, in general.

It was also aimed at showcasing the myriad of achievements of the governor , the party in Kebbi State and at the national level .

The pioneering event was organised by the office of the APC Youth Leader, North West, Kebbi Progressives Stakeholders and the National Association of Kebbi State Entrepreneurs.

Ahmed described Bagudu as, ” the Governors’ Governor, being the chairman of the APC Governors’ Forum , Chairman Presidential Taskforce on Rice and Wheat Production in Nigeria and the Vice Chairman, National Food Security Council.”

The APC National Youths Leader said that,Bagudu has demonstrated credible leadership, just as he has made tremendous contributions to ensure the even development of the state and Nigeria, in general.

” APC and its members at all levels are proud of his tangible achievements and we appreciate his sustainable inclusion of youths both men and women in governance.

” The future of Nigeria belongs to the youths and governor Bagudu has lived above board.”

Ahmed noted that young people in Kebbi State were being given ample opportunities by Bagudu, urging, ‘this happy tempo should be sustained.”

On his part, the North West Youths Leader of the party, Sadiq Saadu Fakai averred that, Bagudu is a Divine gift to the people of Kebbi State.

” He has relentlessly been working to turn around the fortunes of the state and Nigeria, in general, as a Senator, hitherto and as a Governor from 2015 to date.

” He has given myriad of opportunities to the youths and we will continue to cherish and relish this,” Fakai, added .

According to him, Bagudu has given opportunity to youths of the state both at state and national levels to contribute their quota to the development of the State.

‘ We decided to organise this event to appreciate what you have done to youths in the state after our request sometime in 2015 when we appealed for inclusion of more youths in Governance ‘, he said.

He also stated that the event was organized to appreciate the tireless efforts of Bagudu to further uplift Kebbi State.

Fakai explained, ” it is also to showcase the various sterling achievements of APC at all levels.”

Responding, the A PC Governors’ Forum Chairman described youths as the engine room of any nation or government.

According to Bagudu, ” that was why our indefatigable leader, President Muhammadu Buhari has ceaselessly being according top priorities to the youths, in his policies, programmes and appointments.

” We must bring the youths into governance and always be ready to support them when they take risks which we expect them to take , in order for them to succeed.”

The Kebbi State Governor expressed delight that the state was abundantly blessed with brilliant, bold and courageous youths who are making invaluable contributions locally and internationally.

Bagudu also acknowledged the contributions of youths to his administration, public service, as well as the, ” good , hard working and resourceful people of the state. 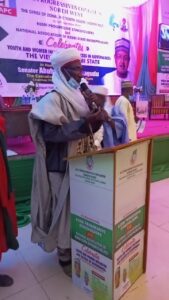 Highlights of the colorful event include Panel Discussion on Youth and Women Inclusion and Sucesss in Governance : The view from Kebbi State which was moderated by Dr. Muhammad Kamba , the Technical Adviser to the Governor on Entrepreneurship and Industrialisation.

Others include, good will messages from the Deputy Governor, Col. Samaila Yombe Dabai, His Royal Highness, Emir of Gwandu and Chairman, Kebbi State Council of Chiefs, Alhaji Muhammadu Iliyasu Bashar and Minister of Justice and Attorney General of the Federation, Abubakar Malami ( SAN) represented by Dr. Umar Jibril Gwandu.

There was also presentation of 5 honarary awards to Governor Abubakar Atiku Bagudu on Agriculture / Animal Husbandry, Health, Education, Youth Empowerment and proper implementation of the state budget according to standard.