Gombe State Governor, Muhammadu Inuwa Yahaya has flagged-off the sales of fertilizer and distribution of high yield seeds to farmers in the State for the 2021 cropping season.

Performing the ceremony at the premises of the Gombe fertilizer blending plant, Governor Yahaya said the commodity would be sold at the rate of N7,500 per bag as against N9,600 sold in the market.

The Governor said his administration will continue to subsidise the price of the commodity while strengthening other agricultural interventions as part of efforts to boost food security in the state and improve farmers’ income.

“In order to sustain supply of fertilizers to the people at the right price, in the right quality and at the right time, we need to restore production in this plant, that is why we worked together with TakAgro and as at today, you can see what we have achieved. 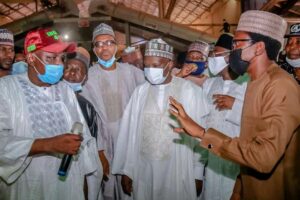 We will sustain this and continue with this company to improve productivity so that states around us will also be supplied from this plant,”.

He said despite the hitches experienced in the process of procurement of Urea, a chemical component for the production of NPK, his administration was able to marshal negotiations with the Federal authorities to allow for the importation of the product.

The Governor explained that the Federal Government, through its security agencies had restricted the importation of Urea especially towards the North East due to fear that that it might get into the hands of bad elements who manipulate it to produce Improvise Explosive Device IED and unleash mayhem in the country.

“Even with the importation of Urea into the State, for our fertilizer blending plant to begin the production of the product in the state, the Federal Government had to deploy the military to guard the product from being diverted from the purpose it was meant for”.

The Governor therefore used the occasion to commend the people of the State particularly farmers for their cooperation and understanding while the struggle to get clearance for the importation of the Urea to the state lasted.

“This has never been in our administration’s policy to keep farmers beyond the month of May without distributing fertilizer to them, so the hitch that occurred was not our making but thank God we were able to resolve the issue with Federal Authorities and production of fertilizer has since commenced in earnest at the blending plant”.

The Governor noted that ever since the establishment of the plant by the administration of late Abubakar Habu Hashidu 19 years ago, other successive governments abandoned the plant until when his administration came on board that the narrative was changed by reactivating the plant and making it functional.

He described the fertilizer being produced at the Gombe blending plant by TAK Agro and Chemical Limited as exceptionally good for usage by farmers who are desirous of good yields.

Governor Inuwa Yahaya stressed that the fertilizer is meant for the teeming local farmers across the State, and therefore warned against any possible diversion of the product, saying anyone found culpable will face the wrath of the law.

The Governor used the occasion to commend President Muhammadu Buhari for providing good leadership at a time when the country is experiencing the worst social, economic, political and security challenges in history.

Earlier in his address of welcome, the Commissioner of Agriculture and Animal Husbandry Muhammad Magaji commended Governor Inuwa Yahaya for his unwavering commitment towards the development of the Agricultural sector by initiating and executing farmers-friendly policies and programmes.

The Commissioner explained the determination of the Gombe State Government under the leadership of Governor Muhammadu Inuwa Yahaya to begin the production of fertilizer in the State has so far led to the blending of about 540 tones of fertilizer by TAK Agro and Chemicals Limited.

pointed out that this was to bring about sustainable agricultural development to ensure food security and wealth creation for farmers.
Magaji added that aside the intervention of the state government in the provision of fertilisers and other inputs, government was also improving the livestock sector in the state.
He said the state government had keyed into the Livestock Transformation Plan of the Federal Government which had resulted in the ongoing development of the Wawa-Zange grazing reserve.

Ina goodwill message, the Gombe State Coordinator, Federal Department of Agriculture, Dr. Musa Mohammed Inuwa said to compliment the administration of Governor Muhammadu Inuwa Yahaya’s giant strides in the Agric sector, the Federal Ministry of Agriculture has embarked on the construction of some rural roads across the State to aid the transportation of farm produce by farmers at the rural areas.

The Managing Director, TAK Agro and Chemicals Limited, Danjuma Abdulkadir said it is only a patriotic citizen like the Governor of Gombe State that could take such a bold step of setting up the only blending company in North East sub-region. 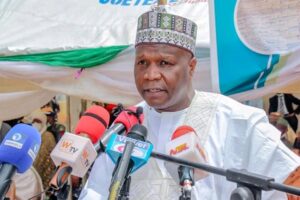 “We are happy to be here and this blending plant will not only serve the people of the State, Gombe has now automatically become the fertilizer hub of the North East”

The Governor also inspected the Gombe Fertiliser Blending Plant which had been abandoned for nearly 19.