Governor Abubakar Atiku of Kebbi State on Sunday bade farewell to the first batch of intending pilgrims from the State to Saudi Arabia.

Speaking during the epoch making event at Sir Ahmadu Bello International Airport, Birnin Kebbi, Bagudu urged the intending Pilgrims to fervently pray for peace and an end to the insecurity and other challenges facing the country while in the holy Land .

He announced that the State Government has made adequate arrangements to ensure the security, welfare and comfort of the pilgrims, both in Nigeria and in the holy land.

The Chairman of the APC Governors’ Forum also urged them to jealously guard their Basic Traveling Allowance ( BTA), as well as all forms of identification while in Saudi Arabia.

He reiterated his call to the intending pilgrims to devout time in praying for themselves, Kebbi State and Nigera in general.

“You should pray for yourselves as well as the urgent restoration of peace and security in all parts of rhe country.

“Please also pray for the success of President Muhammadu Buhari to continue with the good works he is doing for Nigeria. 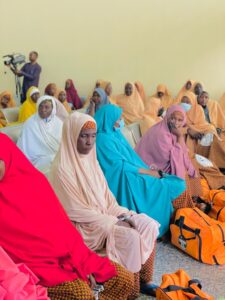 “Please also pray against the recurrence of obnoxious health challenges that stopped the performance of hajj by international pilgrims like COVID-19,”the governor urged.

He also urged the intending Pilgrims to pray for bumper harvest as the country witnesses the beginning of rainy season .

The Progressives Governors’Forum Chairman, thanked the Minister of Justice and Attorney General of the Federation, Abubakar Malami (SAN) for accepting to serve as the State Amirul Hajj .

The Minister of Justice, Abubakar Malami, SAN, who is also the State Amirul Hajj, commended the state government for reposing tremendous confidence in them as the State’s Hajj committee.

Malami assured the intending pilgrims that the committee set up by the state government comprised all types of professionals and technocrats to diligently take care of them, both in Nigeria and Saudi Arabia.

The Minister also appealed to them to guard their BTA and travel documents,especially their international passports.

He also called on the intending pilgrims to desist from taking all prohibited items and illicit drugs, warning,” the punishment for drugs peddling in Saudi Arabia is nothing,but death.” 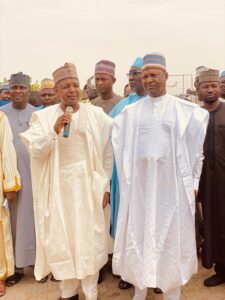 Malami extolled Governor Abubakar Atiku Bagudu for the tremendous development the state has recorded particularly in the rice value chain and area of investment.

The Chairman of the Pilgrims Welfare Agency, Alhaji Haruna Maitandu, also lauded Gov. Abubakar Atiku for making all the necessary arrangements for the welfare and comfort of the intending pilgrims both in Nigeria and Saudi Arabia.

He thanked the governor for providing necessary financial and moral support to the agency in order to ensure smooth conduct of the excercise.

Maitandu informed the governor that all the departing intending Pilgrims have been given their Basic Travelling Allowances, BTA and other essential documents.

The maiden flight of 430 intending Pilgrims of the state who boarded Airbus A340 plane comprised those from Bagudo, Jega and Dandi Local Government Areas.

A total of 2,133 intending Pilgrims from the State are expected to perform this year’s holy pilgrimage to Makka, Saudi Arabia.