Bagudu also addressed the Intenally Displaced Persons (IDPs) at the Nizzamiya Primary School at Waje town in Danko Wasagu over the dastardly attacks .

The governor maintained that he was in the area to express the deepest condolences of the people and government of the state, as well as to fervently pray for the repose of the souls of the deceased persons.

Bagudu further prayed the Almighty Allah to grant the families of the deceased persons the formidable fortitude to bear the irreparable losses.

He lamented that several persons had lost their lives ,including security agents .

” As Muslims and Christians, death is inevitable, but we must mourn the deceased persons as mere mortals

” Efforts are on top gear by the state government and the security agencies to restore normalcy to the affected areas.

” This is to enable the victims to return to their towns and villages, so as to restart their usual socio-economic activities,” Bagudu, added.

The Chairman of the APC Governors’ Forum acknowledged the tireless efforts of the security agencies, traditional and religious leaders, as well as vigilantes in this direction.

He averred that the state government was routinely providing vehicles and other logistics to the security agencies, to bolster their operations.

Bagudu promised,” we will not rest on our oars until peace is restored and everybody returns home. 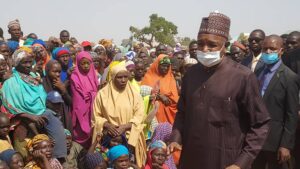 ” These security challenges are spill overs from the neighbouring Zamfara State and we are partnering to redress the obnoxious trends.”

The governor appealed for more patience, faith, prayers and perseverance from the people of the state, even as he assuring that the government will provide the social needs of the IDPs.

Bagudu further noted that peace was paramount, adding, ” everything will be done to ensure that you return to your base as soon as possible .”

He however warned against the dissemination of fake news and other destructive social media postings which according to him would further heighten public tension .

Bagudu also vowed that patrols would be sustained round the clock to facilitate the return of normalcy while relief assistance is underway.

He urged the communities to cooperate with security agencies and furnished them with intelligence report.

He told the governor that in 2015, only Bena district was affected by banditry but the situation has now spilled to three districts in the area with abduction of three village heads.

Alhaji Musa Wasagu lamented that the bandits infiltrated from the neighboring Zamfara State.

He further called for deployments of more security agents to the affected communities. 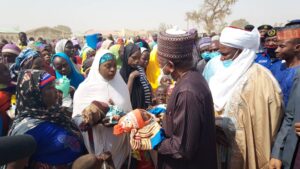 They explained how the bandits infiltrated their villages, killed and caused mayhem, carting away their belongings, farm produce and animals.

They appealed to governor Bagudu for relief assistance as well as mobilise more security to the area so that they could go back to their homes.

He said the IDP camp where the victims were kept comprised both women and children .

After leaving Danko Wasagu, the governor and his entourage paid sympathy visit to Emir of Zuru, Alhaji Sani Sami, Gomo 11 where he commiserated with the Emir and people of the emirate over the unfortunate lost of lives following the bandits attack.

Responding, the Emir appreciated the Governor and his tireless effort to ensure peace return to the troubled areas in his emirate.

He also acknowledged the effort of President Buhari to deal with security challenges across the nation as well as logistic support to security agencies in Zuru by Governor Abubakar Atiku Bagudu.

Afterwards, the governor and his entourage branched at 223 Light Tank Battalion in Zuru where he condoled the officers and men of the Nigerian Army under the commanding officer LT Colenel P.A. Ominiyi for the lost of their two gallant soldiers killed by the bandits .The governor made financial assistance to the families of the deceased soldiers.

The governor on his way back had inspected an office complex constructed by Senator Bala Ibn Na Allah , Senator representing Kebbi South for the Nigerian legion in Zuru.

The Governor was accompanied on the trip by the Security Chiefs in the state such as Director DSS, Bashir Dawaki, the Commissioner of Police, Musa Baba the Army and the Civil Defence,Umar Bala.

Others were the Acting Head of Service, Sufyanu Garba Bena and Special Adviser on Security Garba Rabiu Kamba among others.