Worried by the destructions caused by floods in some communities across Borno State, Governor Babagana Umara Zulum has assigned his Deputy, Umar Usman Kadafur to lead an assessment team to a tour of all affected Local Government Areas for the purpose of ascertaining extent of damages, and to support victims.

Zulum announced the measure on Tuesday after assessing a vegetable market at Moro Moro, a community around customs in Maiduguri, which has been ravaged by flooding.

The Governor commiserated with flood victims across the State.

“We are once again visited by this unfortunate flooding which has affected communities not only in Maiduguri but in some Local Government Areas. Insha’Allah, the Deputy Governor, His Excellency, Umar Usman Kadafur will be heading an assessment team that will visit all affected communities in all the Local Government Areas that have been affected, with a view to determining extent of damages, and identify victims for the purpose of intervention by the State Government” Zulum said. 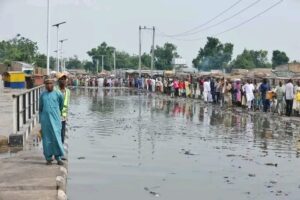 The Governor also spoke on problems associated with blocking of water ways, citing that more than 1,000 houses have been illegally built on routes that ought to be water channels and as a result, forcing water to pass through communities and cause destructions.

Zulum said the State Government will provide temporary measures for now but after the rainy season, there will be need for permanent measures that may require resettling shelters currently located on water ways, after coming with a consultative approach. 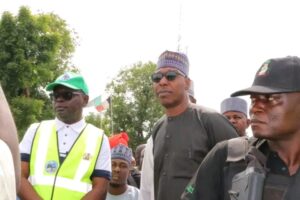 The Governor, it can be recalled had in July this year, visited communities affected by flooding in Damboa and offered them support.

Zulum had two weeks ago, also sent out a Committee headed by Barrister Kaka Shehu Lawan, APC’s candidate for Borno Central Senatorial election in 2023, and former Attorney General and Commissioner of Justice, who had overseen Borno’s Ministry of Environment at different occasions, hence familiar with matters of flooding and controlling it. 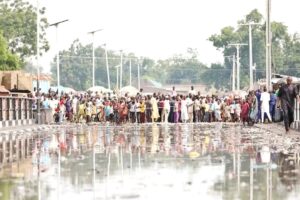 Lawan’s Committee was at some communities affected by flooding in Maiduguri, to assess damages.

Governor Zulum has since 2019 established the Borno State Geographic Information System and also enhanced the capacity of the State Urban Planning and Development Board which works with relevant Ministries to among other things, take measures that will address perennial flooding across the State, especially in Maiduguri, which is the most populated with the highest number of residential houses.

The establishments have been putting measures which have so far reduced flooding in some communities with more being targets in their works in progress.