The Federal Government is set to inject the sum of N1.62bn within three months through the special works program that engages 1000 youth in each local government in Jigawa state.

The state Governor Badaru Abubakar disclosed this during the flagging off of the programme in Dutse the state capital. 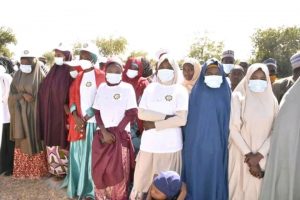 “There is nowhere in the world where social investment programme is done the way Baba Buhari is doing. Thousands women have benefited from the N20,000, hundreds are benefiting as cooks through the school feeling programme, and also many youth have participated in the Npower programme. We can’t thank the president enough” the Governor said.

The Minister of Water resources Alhaji Suleiman Adamu, who is also present at the occasion the programme was part of the federal Government’s effort to lift many Nigerians out of poverty.

He cautioned the beneficiaries to see the programme as an opportunity to get hold of capital which they can rely on after the three months elapsed.

“Many businessmen did not had the opportunity you are getting. Most of them start with little or even less that what you would get at the end. And they were able to turn the capital into millions. So, if they can do it, you can also do it.” The Minisiter said.