In recent years, farmers in Nigeria have witnessed low and unpredictable rainfall variations.
This, coupled with other agronomic challenges, has posed serious problem to the country’s crusade on food sufficiency as majority of the farmers practise rainfed farming system, with little supplemental irrigation in some areas.

Maigatari is one of the local government areas in the Sahelian zone of Jigawa state with long dry season and short wet season.
The semi-arid agrarian area sometimes experiences delayed onset and early cessation of rainfall, sometimes with occasional dry spell.

The Nigerian Meteorological Agency (NiMet), in its 2021 Seasonal Rainfall Prediction, said onset of rainfall in Maigatari local government was predicted to be on June 22, that is almost a month after the establishment of rainfall in Bauchi and Gombe (May and early June, respectively).

Presenting the highlights of the NiMet’s 2021 Seasonal Climate Prediction (SCP) earlier this year, the Minister of Aviation, Sen. Hadi Sirika, said available evidence showed that Jigawa, Zamfara, Katsina among other northern states would experience severe dry spell after the onset of rainfall.

In Maigatari, the dry spell is persisting as crops in the area are seen showing moisture stress signs.
As harvest in places like Gombe is in full swing, farmers in Maigatari are yet to commence the activity because onset was delayed and occasional dry spell is being experienced.

A farmer in Dunguyawa, a RUGA settlement in Matoya ward of Maigatari area of Jigawa state, Malam Ibrahim Rabo, said he suffered crop failure when he attempted early planting during the false onset and had to supply and later plant again, because there was a severe dry spell in the area.

Narrating his ordeal, Malam Rabo said, “I planted two times but it didn’t germinate because there was no moisture. Rain had ceased then. It’s later that I planted before I have what I’m now hoping to harvest from.
And even the sesame I’m growing, I can tell you that I will have poor yield, judging by what I’m seeing.”

Malam Salisu Shu’aibu Hussaini, a farmer in Maigatari town, said intermittent dry spell in the area is raising fear of reduction in crop yield.
“Last year, we planted our crops around May and early June, but this year because of the delay of the onset, planting began in July.”

When asked on the effect of low rainfall in the area, Shu’aibu said, “the crops are of course wilting because there is no moisture that will nourish them. The issue is, the rain ceased at the critical stage of its demand by the crops.”

On what farmers should do to avert the chances of crop failure because of rainfall shortage, Dr. Yunusa Muhammad Shu’aibu, an expert in Agronomy and lecturer with the Department of Crop Production, Abubakar Tafawa Balewa University (ATBU), Bauchi, advised farmers to always adopt climate smart agriculture through basing their production in line with weather information and use of early maturing variety of crops. 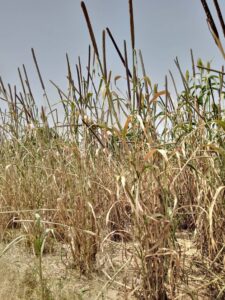 “Once rainfall is predicted for a particular area, farmers should plan their production calendar based on the prediction. Farmers should also target early maturing variety of crops and adopt drought mitigation strategies. In rice production, for instance, farmers can start early with irrigation in areas with sources of water before the onset of rainfall for the critical stages of plant growth and development to coincide with period of peak rainfall.
“If drought occurs, they can irrigate to enable the plants absorb the shock.”

Asked on the factor that could be responsible for the intermittent drought in the area, Dr. Muhammad said, “it could be the impact of climate change. And this normally occurs anthropogenically due to high rate of deforestation.”

Mrs. Aishatu B. Usman, a lecturer with the Department of Agricultural Economics and Extension, ATBU, Bauchi, however, maintained that an important determinant of adoption of climate smart agriculture is the availability of extension workers that will communicate the knowledge of climate risk management to farmers.

Rilwan Muhammad, corps member, contributes this piece from Maigatari, Jigawa state, and can be reached via reedwandk@gmail.com 07061124918