This is one of the most hectic weeks His Excellency Governor Bala Mohammed has spent in recent time. The week was occupied with fruitful schedules, geared towards socioeconomic and political development of Bauchi State.

Beginning on Monday, September 13th, Governor Mohammed according to reports from his Special Assistant on New Media Lawal Muazu Bauchi,pledged to construct classrooms blocks and road in Dajin Community of Tafawa Balewa Local Government Area of the State.

The Governor who expressed with dismay the situation of classrooms in the community, ordered the Secretary to the State Government Alhaji Ibrahim Kashim to ensure effective implementation of the project. 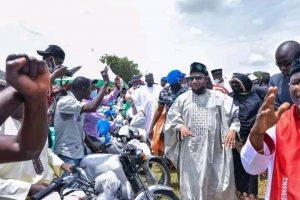 He appreciated the Dajin Community for their support to his administration, calling on them to maintain the tradition for the success of the administration.

Also on Monday came a report that the Executive Governor launched the Kaura Economic Empowerment Program (KEEP) in Bogoro and Tafawa Balewa Local Government Areas of the state.

Speaking at the occasion, Governor Bala said the programme empowers youths and women for the economic development of Bauchi State.

He expressed satisfaction with the positive impact the programme had had and appreciated the massive turnout and support by the citizens. He added that his administration would sustain the program to ensure effective it’s success.

Governor Bala appealed to beneficiaries to make good use of the items saying that his administration was committed to uplifting the living conditions of the people of the state.

Also speaking, the State First Lady, Hajiya Aisha Bala Mohammed said the empowerment would go a long way in curbing poverty and indolence in the state.

The occasion had in attendance, His Excellency, the Deputy Governor, Senator Baba Tela, the Speaker, BAHA, Rt Honorable Abubakar Y. Sulaiman, the SSG, honorable commissioners among others.

During the condolence visit at Ilelah, Governor Bala described the loss as great and irreparable. He commiserated with the family, friends and the entire Ilela residents.

Governor Bala said the legacies of late Malam Ahmadu would always be remembered, while calling on the deceased family to emulate such virtues. The Governor, therefore, prayed to the Almighty Allah to grant him Janna

Responding on behalf of the family,
Malam Almustafa Baba Ilelah thanked the governor for the condolence and wished him safe return.

Speaking during the condolence visit to the family of the deceased at Tirwun, Governor Bala extended condolences on behalf of Bauchi State Government .

Governor Bala described the late Maidawa as a man whose life was full of dedication to his community, adding that he was personally pained by the loss.

The Governor pledged to support the family to ensure their well-being and comfort.

Wednesday saw a development project, as the Housing Project in Dass Emirate under the administration of Governor Bala Mohammed reached completion stage with a view of providing family homes and expansion of the urban areas.

Reported by the Governor’s Special Assistant on New Media, the Dass housing project like it’s conterperts in Bauchi, Ningi, Jamaare, Katagum and Misau Emirates respectively is being executed in collaboration with Family Homes Funds with a view to modernizing, providing, modernizing as well as expansion of both rural and urban areas of Bauchi State.

Governor Bala Mohammed had on March 2020 flagged off the exercise at Dungal community of Bauchi Local Government Area.

According to the governor his administration would continue to provide the citizens with developmental projects for the economic growth of Bauchi State.

In the same vein, on Thursday, September 16th, Governor Bala Mohammed performed the official laying foundation of the mass housing project with the support from the North East Development Commission(NEDC). 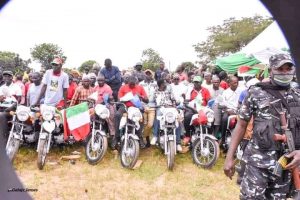 Speaking shortly before the ceremony, Governor Bala said the occasion underscores the NEDC’s desire to providing affordable shelter to a common man.

According to Governor Bala his administration’s objectives include provision of decent, qualitative and affordable houses to citizens of the state.

While commending the NEDC, the governor said his administration had since embarked on an ambitious massive housing project in collaboration with Family Homes Fund which is a subsidiary of the Federal Ministry of Finance.

He added that, the distribution of the food and non-food items by the Commission would provide not only shelter, but other basic needs of the people, urging the beneficiaries to make good use of them.

Bala Mohammed appreciated the Commission for its commitment towards uplifting the living conditions of the people of the North East region through the provision of infrastructural facilities and other social amenities.

Speaking during the inspection visit, the governor said the roads need urgent interventions of the Commission considering their strategic location as interstate transportation network and socio-economic development of the region.

Also speaking, the MD, NEDC, Alhaji Mohammed Alkali Goni said the commission will consider rehabilitation of the roads in line with the North East Stabilization and Development Master Plan.

Speaking during the occasion held at the Banquet Hall, Bauchi Government House, Governor Bala congratulated and charged them to work together with commissioners, relevant stakeholders and groups to ensure smooth implementation of government policies and programmes, adding that their appointments were based on merit.

According to the governor his administration would continue to provide the citizens with developmental projects adding that this could be achieved with cooperation and understanding between officials, civil servants and relevant stakeholders.

Governor Bala said it was expected of them to introduce strategies to support his administration’s plan of reviving sectors for the economic growth development of the State.

Governor Bala reiterated his administration’s commitment towards restructuring the State, hence the need to work together with relevant stakeholders and donor agencies within and outside the State.