Kebbi State Governor, Senator Abubakar Atiku Bagudu has stressed the need to lay more emphasis on revenue mobilization in the country, rather than sharing .

The Governor spoke on Thursday at a Sensitization Workshop organized by the Revenue Mobilisation & Fiscal Commission, at the Presidential Banquet Hall, Birnin Kebbi.

Bagudu regretted that, so much emphasis has been placed on the monthly federation account allocation between the three tiers of government .

He said that, yet, the money shared monthly was largely inadequate for all three tiers of government, as such , there is a routine deficit in the provision of the direly needed dividends of democracy to the people .

Bagudu recalled with nolstagia how for instance only a paltry of about N 700 billion, less than 2 million dollars was being shared monthly amongst the three tiers of government. 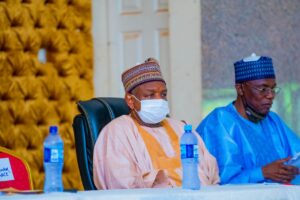 He said:” I have repeatedly opined that there is a serious resources deficit in the country and its taking a negative toll on all of us .

” Even if you review the revenue allocation formula, the states should have five percent more added to what they are getting now.

“There is a fundamental inadequacy and meetings like this should help us to come to agreement’.

The Chairman of the APC Governors’ Forum added that Kebbi State, for instance with about five million people was getting between N67 billion to N70 billion yearly .

He said that the state’s open government partnership framework and the officials of the state government would work out its position paper on a new revenue allocation formula.

” Hence, Kebbi can even influence other states and it will eventually become a pacesetter,”he averred .

Bagudu also mulled the idea of focussing attention on other areas of revenue mobilization like gold mining and agriculture, like its being done in other climes.

According to him, Kebbi State is also a party to many transparency and accountability initiatives, as exemplified by President Muhammadu Buhari.

The Kebbi Governor challenged the commission to put this issue on the front burner, so as to get more funds for even national development.

Bagudu commended the commission for organizing the workshop ,saying , ” This is to draw attention to the fact that they are taking action for the possible review of the allocation formula.

” This is with the consideration of the commission preparatory to making submissions to the presidency. 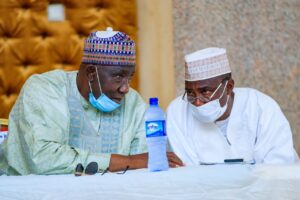 ” This can hopefully translate into a new proposal to the National Assembly for a new revenue allocation formula. ”

Earlier, the Federal Commissioner Revenue Mobilisation,.Allocation and Fiscal Commission, Alhaji Rilwanu Hassan, said that the objective of the sensitisation workshop was to enlighten all major stakeholders on the need to participate and make relevant contributions in the process of the review.

“The aim also is to assist the commission to come up with just, fair, equitable and acceptable revenue allocation formula for the country.

“The 1999 Constitution (as amended) empowers the Commission to regularly review the revenue allocation formula,” he said.

According to him, the commission, given the changing socio-economic and political dynamics in the nation, was engaging stakeholders to fashion a new sharing formula.

He noted that the review was to fulfill the collective aspirations of the people for sustainable development.

The commissioner assured that the Commission would take serious consideration all views and recommendations that would emanate from the public hearing.

The sensitization workshop is attended by Government officials and NGOs among others.

In a vote of thanks, the Kebbi State Commissioner for Finance, Hon. Ibrahim Muhammed Augie thanked the Commission for organizing the sensitization workshop.