Zulum has been in Bama in the last three days, since arriving Monday, for humanitarian and developmental activities.

The governor addressed the volunteers on Wednesday night around the Shehu of Bama’s palace.

The volunteers comprised of 313 members of the ‘Civilian JTF’, 105 hunters, 155 local vigilantes and 110 members of a border vigilante group called ‘Kesh-Kesh’. 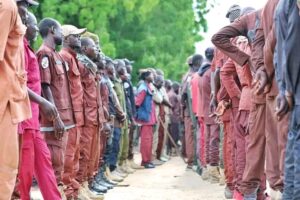 Governor Zulum also distributed two bags of rice and maize to each of 683 volunteers, making 1,366 bags in total.

The governor added a gallon of cooking oil and 10 yards of brocade to each of the 683 volunteers.

Before the gifts, Zulum addressed the vigilantes:

“Please accept from me, the deepest gratitude of government and the entire people of Borno State for your unquantifiable sacrifices that cannot be paid by any amount of money or material things. Many of your colleagues gave their lives for us to gain the peace we are enjoying today. Many of you have taken the highest risks of going to battle fronts, leaving your loved ones and the comfort of your homes. We can never forget your sacrifices and we are immensely grateful to all of you and to all volunteers and our armed forces who lead the war”, Zulum said.

Bama is identified as worst affected by Boko Haram’s destructions and displacement, according to a 2016 assessment report co-authored by the World Bank, the EU, United Nations and Nigerian Government. 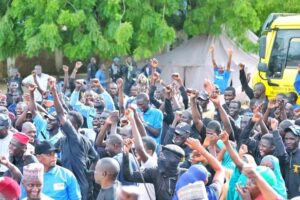 It was based on that report that Governor Zulum has accorded special attention to Bama’s rebuilding and resettlement as well as supporting residents with food and cash for livelihoods as communities gradually return to farming and other business to eventually begin to rely on themselves rather than depend on aid.

Zulum has, this year, mobilized many resettled communities to return to livelihoods with a number of markets now reopened, many farmers able to safely cultivate crops, commercial trading of dry fish now back in areas like Baga and trans-boarder trading also back in areas like Banki among others.