Kebbi State Governor, Senator Abubakar Atiku Bagudu says he has concurred with President Muhammadu Buhari that the problem of banditry is not a religious or tribal problem.

” President Muhammadu Buhari has said that the banditry phenomenon even though regrettable should even make people to come together and think differently, ” he added,

Bagudu spoke on Thursday when he received the President of the Christian Association of Nigeria (CAN), Dr Samson Ayokunle, on courtesy visit at Government House, Birnin Kebbi.

The governor lamented on how myriad of misconceptions about several issues were ignorantly causing unnecessary hiccups amongst the citizens of the country. 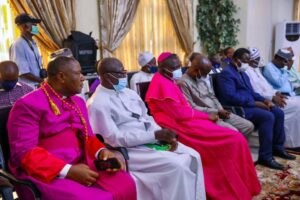 He again harped on the need to place more emphasis on revenue mobilization, rather than sharing in the country .

The APC Governors’ Forum chairman further said,” President Muhammadu Buhari has instilled transparency and accountability in the management in resources of the nation.

” These resources are still too inadequate and all the communities across Nigeria have remained largely underserved .

“That is why Nigerians will continue to get more angry at each other and its better if we mobilize more resources to share,” he emphasized.

Bagudu described CAN as a very important body and charged, ” they can tell the world what our problems are.”

The governor extolled the president for the visit , saying that, it has tripartite important reasons.

” They include; to pray with us, to show support to what’s happening in the north west and appreciate what we all do together .

” The situation in the north west puts to question a lot of misconceptions we have about ourselves.”

The President of CAN, Dr Samson Ayokunle had earlier told Bagudu the visit was also for three reasons that include to pray with all for greater wisdom for the leadership of Kebbi State.

This, the CAN president stated was for the people to reap more dividends of democracy. 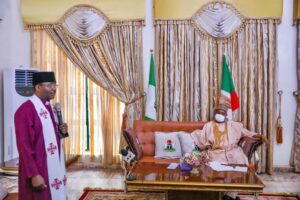 ” It also to identify with the north west as regards banditry and the north was hitherto very peaceful .

” We are also here to commend Gov. Bagudu for ensuring a balanced government between all the religious groups in the state.

” If all Governors are like Bagudu, there will be no problems and hiccups in the country .

” It should be live and let others live and we are commending the governor for giving Christians a face and a sense of belonging in the state. 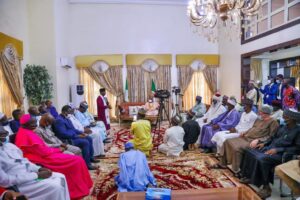 “He has done a lot of good things and he is still doing, like the regular payment of salaries to the workers,” Ayokunle, added.

The CAN president further extolled Bagudu for , ”showing mercy and other good things in the state,

” These include the construction of good roads, as well as the allocation of a burial place for Christians in the state,”